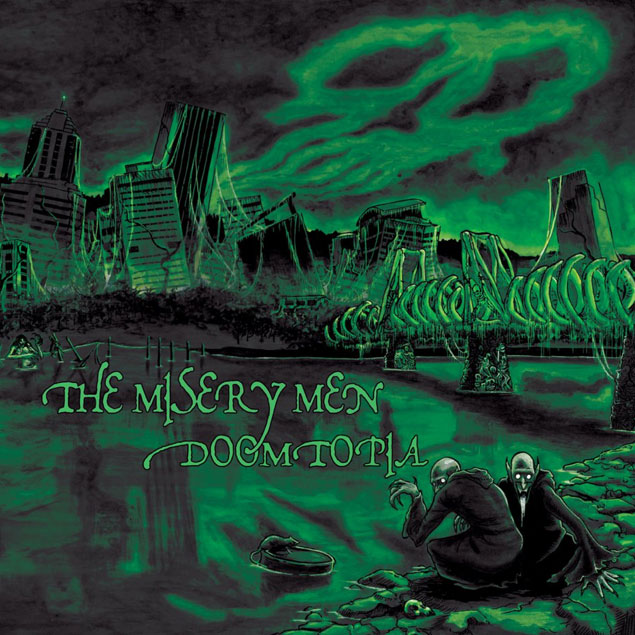 Doomtopia is the 2nd album by Portland, Oregon based band The Misery Men. The songs were written by Corey G. Lewis who is the founder of The Misery Men, singer, and plays riffem guitar. All songs were recorded at Wrong Way Recording engineered by Rob Wrong of Witch Mountain, in the basement of his home that once served as a rehearsal space for the late great Elliott Smith.

The first three songs recorded were done in January 2019 with just Rob and Corey. Initially the idea was to have multiple drummers, and bass players on the album, so Billy Anderson laid down a bass track on Lion’s Head. Flash forward, along came the local 2-piece band Breath, featuring Steven O’Kelly on bass, and Ian Caton on drums, who had played a gig with The Misery Men.

These two have been playing together since High School in the Portland area. Breath is a very Sleep / Om heavy worship, fitting as the new album by The Misery Men is called Doomtopia. Also lending more bass on the second half of Houdini’s Eyes is again Billy Anderson, legendary engineer for such bands as Sleep,(the) Melvins, High On Fire, Neurosis, Witch Mountain, and many more. Rob Wrong lends his lead mastery work soloing on Lion’s Head, Houdini’s Eyes, and Meg Mucklebones.